Blinx 2: Masters of Time and Space 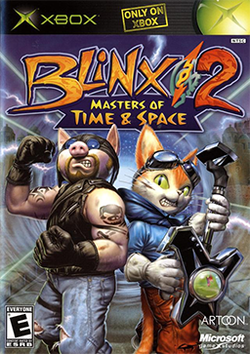 Blinx 2: Masters of Time and Space has a new storyline. Benito, the boss of the Tom Tom Gang, discovers The Big Crystal hidden in a cave. Once he touches it, it breaks into eight fragments in which both the Tom Toms and the Time Sweepers will have to obtain throughout the game. This makes the Goddesses of Time angry. Their daughter Mina appears to Benito in dreams and informs him in short, confusing sentences that he basically pays no mind to, about the Big Crystal and what could happen if the fragments were not retrieved. In this game, the player alternates positions as a Tom Tom pig and as a Time Sweeper. Once each side has collected four crystals, a CEO of the Time Factory announces to the facility that "The scissors of the goddess will descend on A-Tripple-Zero". The Time Sweepers are sent to that world to fight the Scissor Demon. During the battle, a team of Tom Toms appear and work together with the Time Sweepers to defeat the monster.

When the boss is defeated, videos are shown and Mina appears to Benito and is visible to other Tom Toms who thought that she was just a dream. Soon the Time Factory gets an alert that world 5J7A is being infiltrated by Tom Toms, and their newfound trust in the Tom Toms is broken. This was believed to be a tip-off of Blinx 3, but Artoon's main developers left and created a company called Arzest. I actually emailed Arzest inquiring about a Blinx 3 game, and they answered that they were not in the position to make Blinx 3.