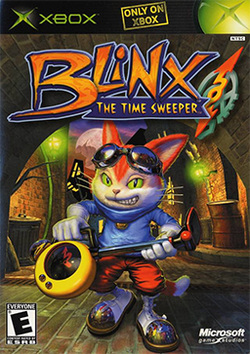 *In Blinx: The Time Sweeper, the player takes on the role of Blinx, an anthropomorphic cat who works at a facility known as the Time Factory. The Time Factory is a facility located outside of Time, dedicated to the creation, distribution and maintenance of the flow of all time throughout the universe. When glitches or corruptions in time are found, the Time Factory dispatches Time Sweeper agents to locate and correct them. Left unchecked, temporal glitches can manifest themselves into malevolent Time Monsters, roaming freely among dimensions, distorting everything with which they come into contact. When a gang of evil pigs known as the Tom-Tom gang begin stealing and destroying Time in dimension B1Q64, it becomes temporally unstable to the extent that the Time Sweepers decide that it is safer for all dimensions if the supply of time to B1Q64 be halted, suspending it and its inhabitants indefinitely. When Blinx receives a message from a young princess trapped within the doomed dimension, Blinx grabs his Time Sweeper and dives into dimension B1Q64 through the Sweepers' Time Portal moments before it closes.

After he manages to catch up with the Tom-Toms and the princess, they suddenly freeze and get spun around. This creates the final boss which can use time controls as well, so it forces Blinx to fight four previous bosses by using REW (all of which are the harder vesions of the ones that you fight in rounds 1, 2, 3 and 5). After he defeats them all again, he fights the final boss, wins and saves the sleeping princess while the Tom-Toms get away. Then he jumps into the Time Portal and ends up back in the Time Factory to be welcomed by an applause from the other Time Sweepers. After the credits roll, the player sees a message written by the princess (her real name, Princess Lena, is reveled at this point as well). Using the time crystals Blinx gave her, she rewinds the ending back to the part where Blinx is about to leave. Before he jumps in the Portal again, she wakes up and gives Blinx a hug.