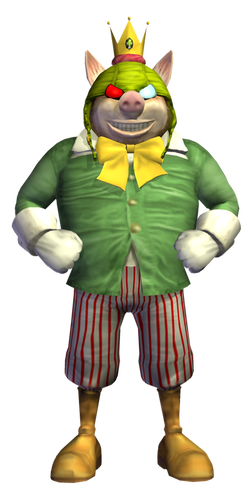 Benito
The Tom Tom Gang is the rival of the Time Sweepers. Their boss, Benito, is portrayed as a demanding, overweight slob who likes to boss his pigs around. His "right hand men" are Ugo, a smart, scientific pig, and Cino, a destructive, though levelheaded, pig who seems to have an Italian or Hispanic accent. There are many teams and pigs, one of them being Carlos, the shopkeeper, who is a bit aggressive. The Tom Tom base is located on an island inside a shack shaped like the head of a pig, which is also the Tom Tom logo.

*Space Controls
BLACK HOLE - Sucks the target up and drains their health.

QUANTUM SNARE - Creates multiple space holes that Tom Toms pop out of to grab nearby Sweepers.

HYPERCLOAK - Makes the user invisible so he won't be detected from Guard Sweepers very easily. However, this space control also slows the user down and if the user moves too fast Sweepers will still be able to detect them.

SPACE BUBBLE - Creates a space bubble that nothing, but the user, can escape from.

VOID TRAP - Creates a space hole that transports the target to another dimension.

SUBSPACE DIVE - Allows the user to drive into a space hole underground and move about without being detected. However, while under the user has a limited amount of time in subspace due to lack of oxygen.

WARP TUNNEL - Allows the user to create a space hole at a distant location and let them warp to it through another space hole. This control is useful when moving heavy bags around places with obstacles that cannot be passed when carrying a bag.

Tom Tom Gadgets
DECOY - A toy decoy that transforms into the user and walks about to distract Sweepers.

BANANA - When thrown at sweepers it causes them to fall and knock themselves out.

TIME GRENADE - Does exactly the same as the PAUSE time control. Stops time for everything in the world for a short amount of time. This doesn't appear to have any effect on regular Sweepers.

To use the Time Control Neutralizer the user must jiggle the left control stick until they are freed.

Originally, only Time Sweepers had this device in the game (though it's never mentioned but still used), though later the Tom Toms stole a Time Control Neutralizer from the Ruins of Time.